Mustangs FC is a goal kicking comedy drama about girls who are abandoning the sidelines and starting their local football club’s first all female team. Against the odds, they’ll stand united and overcome any challenge the club, the boys or the opposition can throw at them, all while wrestling with what it means to be a girl today.

This is the story of the team’s bid to get to the final of the divisional league and captain Marnie facing an uphill battle. Has she got what it takes to lead this rookie side through it’s first massive season? Time to girl up and see..

Marnie’s best friend Liv is an enthusiastic player who sometimes forgets that being a goalkeeper means she has to actually guard the goal. Reluctant Bella refuses to get off the bench and over-scheduled Anusha is trying to revise nuclear physics during the drinks break. Ruby’s a great striker - maybe a little too great for competitive Marnie to handle - but is she even going to hang around for a season when she’s so desperate to head back to LA? And surely Princess Lara will be constantly on the injured list with a broken nail? Can these girls overcome their differences, support each other better than Serena’s sports bra and work out there’s no “i” in team?

As well as playing great soccer, this girl squad have got to work out how to be a friend. A sister. A daughter. A captain. A good sport. And how all that may be hard or sad or ridiculously crazy or laugh out loud funny. But when you’ve got your team mates behind you, there’s no better feeling than playing like a girl. 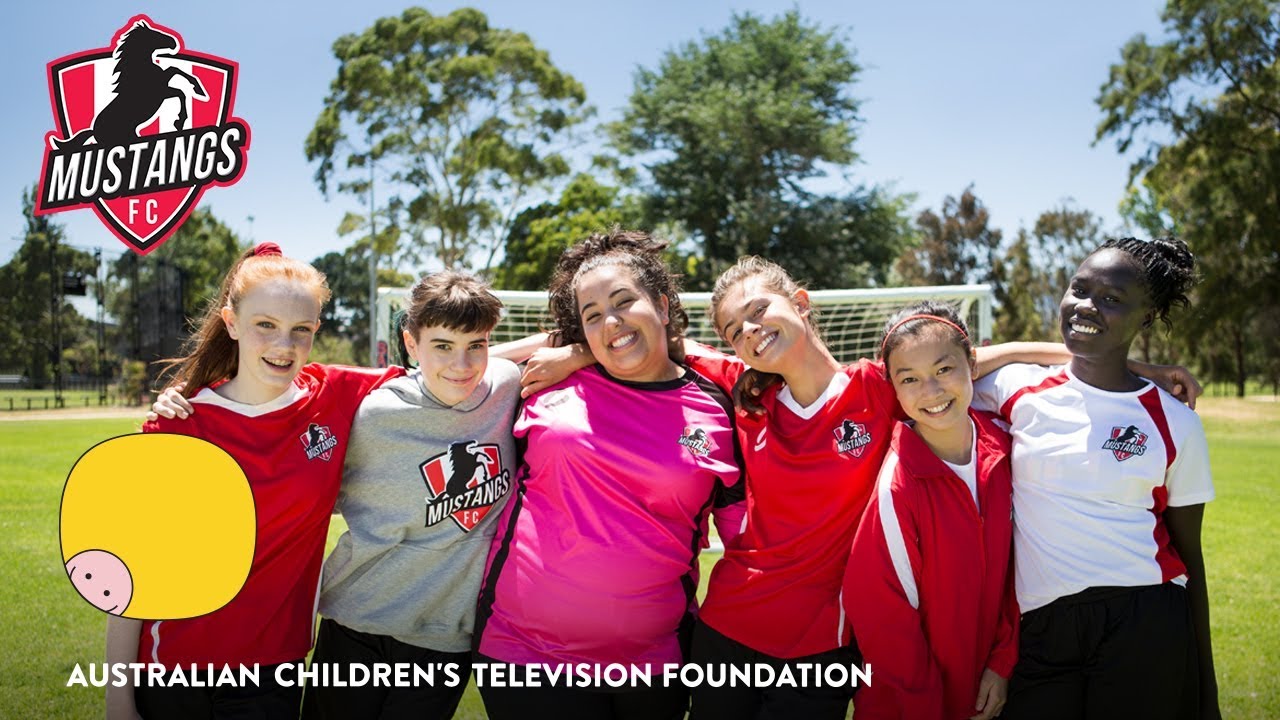 Mustangs FC is a goal kicking comedy drama about girls who are abandoning the sidelines and starting their local football club’s first all female team. Against the odds, they’ll stand united and overcome any challenge the club, the boys or the opposition can throw at them, all while wrestling with what it means to be a girl today.

This is the story of the team’s bid to get to the final of the divisional league and captain Marnie facing an uphill battle. Has she got what it takes to lead this rookie side through it’s first massive season? Time to girl up and see..

Episode 1
Goals
It’s the beginning of pre season for brand new all-girl soccer team, the Mustangs, and striker Marnie can’t wait to get started with her BFF, Liv. But the new team’s got problems. They have no uniforms, no dedicated change rooms, can barely field a team and their coach - Marnie’s mum, Jen - is clueless about the beautiful game. Things aren’t great at home for Marns either. Jen has got herself a new boyfriend - Kev - and Marnie is feeling the pain of sharing her space.

Episode 2
Like a Boss
Despite acquiring experienced new coach Danny, the Mustangs still have a long way to go. The girls run into conflict with Gabe and the boys over sharing the change rooms and are given a sub-standard gravel pitch to play on. And when they get accused of “playing like girls”, it’s the last straw for Marnie. It’s time to fight back.

Episode 3
Can't Even
The Mustangs are looking forward to the first game of the season proper and Liv is apprehensive about her goalkeeping strategy. But Marnie’s got her own problems. Previously used to being the star, she’s increasingly jealous of new hotshot Ruby. And after the players kits finally arrive, Marnie draws unnecessary attention to her friend’s XXL-sized jersey and Liv gets upset and leaves. Nice one, Marns… not!

Episode 4
Game Changer
After losing a close and exhausting match, the Mustangs realise they must get fitter if they want to start winning. Marnie tries to work on her fitness at home but is distracted by Lara doing stretches and gymnastic moves outside with Jen. Angry and jealous, she finds Lara’s phone and posts an unflattering gif of her messing up a move. Marnie immediately feels bad but it’s too late - Lara’s revenge time bomb is definitely ticking…

Episode 5
Girl Crush
Bella is forced to play in a match but when her moment comes, things go horribly wrong and Danny sacks Bella from the Mustangs. To make matters worse, her dad says he’s coming to her next game and bringing the whole family in support. How is she going to hide the fact that she’s no longer even on the team?

Episode 6
OTP
The girls play a mixed futsal match with the boys and hormones are raging. Now that Liv and Hamit, (of the Mustangs boys team) are officially an item, romance is in the air and Willow lets slip that she thinks Marnie and Gabe are OTP - one true pairing. But Marnie either can’t see it or won’t admit it. She can't imagine kissing Gabe... can she? Determined to move the budding romance forward, Lara organises a party.

Episode 7
Kick it Like a Girl
The Mustangs are on a road trip, heading off to play in a round robin competition. Anusha’s bunking in with Bella but she’s still upset after getting snubbed at the party, when Bella got a kiss. She doesn’t think she should have been second banana, especially to someone as socially awkward as Bels. The tournament kicks off with Mustangs vs. Wildcats and that rivalry is as fierce as it ever was but at the end of Day 1, the Mustangs are in last place on the ladder. Gutted.

Episode 8
Oh Em Gee
Marnie enlists Danny’s help to work out what’s so great about the Wildcats. He suggests she needs to ‘know her enemy’ so Marnie goes spying at the Wildcats clubhouse and is stunned to see their amazing facilities, fantastic change rooms… and Ruby sitting in the clubhouse for a team talk. Marnie’s hunch was right. Ruby is defecting to the enemy.

Episode 9
Flawless
Lara is well and truly infiltrating every aspect of Marnie’s life - her bedroom, her home and her team - and Marnie is totally over it.  Having previously sucked up to Tom the ref when he embarked on a painful bout of mansplaining on the offside rule, Lara dives like a diva and gets awarded a dubious free-kick by Tom. Marnie is furious at Lara for staging such a dodgy and calculated move and her inner frustrations and insecurities bubble to the surface.

Episode 10
R U OK?
Anusha is devastated. She’s failed her chemistry test – so maybe it’s time she gave up the Mustangs to concentrate on more serious academic work. Bella’s desperate to ensure she doesn’t lose her friend on the team, so she asks Marnie to let Anusha help with tactics. Maybe if Anusha sees how she’s the best at soccer strategy, she won’t leave. And now that the Mustangs have made it into the top eight, they need all the help they can get.

Episode 11
The Feels
The Mustangs have made it to the final eight, but Marnie’s in a slump - Anusha’s tactics divided the team, Lara’s lecturing her on leadership, Liv is giving her the stink-eye and even Gabe is sick of being used as a shoulder to cry on when he wants to be so much more. Could life suck any harder?

Episode 12
Slay
You’ll never believe it - but the Mustangs have gone and won their semi final! But their celebrations are short-lived when they realise they will have to face their nemesis in the final - the mighty mighty Wildcats.

Episode 13
Mustangs Forever
The nail biter of the final and the Mustangs are 2-0 up. But Liv is jumpy in goal and in a panic, she concedes two goals to the Wildcats and subs herself off.  Under pressure in her first game back, Anusha fouls the opposition. It’s a sloppy slide tackle, not intended to be violent, but Gabe (the ref) immediately blows it up. Emotions explode in an already tense match and parents begin arguing furiously on the sidelines. As things get badly out of hand, Gabe is forced to blow his whistle and abandon the game. Disaster!